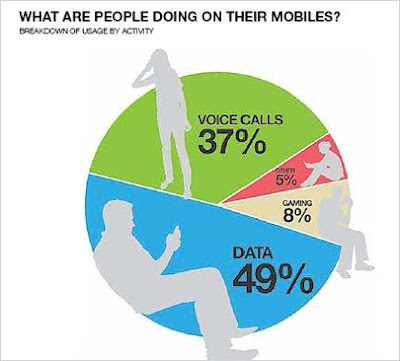 From: Online Media Daily.
The so-called third screen is increasingly finding itself at home alongside the TV and computer screens, according to a new study. The report, by media agency Initiative, found that 60% of mobile Web usage is now taking place at home, bringing smartphones closer to the promise of being "always on" devices.
Nearly a third (30%) of smartphone users start their day with the mobile Internet and 45% end their day with it, with the peak time for use while relaxing at home in the evening (64%). The only time Web use falls off dramatically is when people are actively engaged in other activities like sports or at live events.
"This clearly demonstrates how mobile Internet use has caused a significant shift in consumer need to have constant connection with the outside world," stated the report, which based its findings on a survey of 8000 active smartphone users across Italy, Sweden, the U.K., U.S., Australia, China, India and South Korea.
What's more, people are accessing the mobile Web at home while consuming other media. Half of smartphone users said they browse the mobile Web while watching TV, listening to the radio, and while traveling. Thirty-nine percent do so while using the PC-based Internet, and 34% while reading newspapers and magazines. From these findings, Initiative concluded that marketers can use mobile to amplify messaging in other media.
"Through mobile, marketers can provide consumers with a way of immediately engaging with the brand, whether prompted by an advert, or a thought or conversation they've just had," states the report. That effort should include tagging ads in various media with a way for people to respond to offers or participate in promotions via mobile device.
The Initiative study also underscores the role of applications in expanding mobile media use. More than 80% of smartphone users have downloaded at least one app, with that figure hitting 100% in China. People may sample a variety of titles, but on average regularly use only eight apps at any given time.
The vast majority of apps are free, with 70% of consumers having more free than paid apps, and 25% never having paid for an app. But people are not necessarily unwilling to pay for apps. Sixty percent of smartphone users in the U.S. have spent more than $5 on an app, with 35% spending over $15. Italians are the biggest spenders, with 65% spending more than €5 ($6) and 44% more than €15 ($18).Still, most users said they would prefer to get apps for free in return for accepting advertising rather than pay.
How do people find out about apps? Recommendations from friends and family are the most common way, followed by general Internet search through an app store and online reviews. Traditional advertising comes in between seventh and tenth place as sources for discovering apps.
With growing use of the mobile Internet and applications, Initiative expects the smartphone to increasingly become a mobile wallet as well. The agency estimates that 32% of our U.S. consumers already use 'pay-by-mobile' technology, with about one-third of that group willing to spend between $50 and $100.
A separate study released by Gartner Monday offered less bullish figures. It projected that mobile payment users will reach 108.6 million worldwide in 2010 -- a 54.5% increase from 2009. But only 3.5 million of that total will come from North America, and only 7.1 million from Western Europe. Both regions lag well behind Asia/ Pacific, which will account for 63 million of the expected 108.6 million mobile payment users this year.