Twitter Timeline. Hint: It Started A LOT Earlier Than You Think 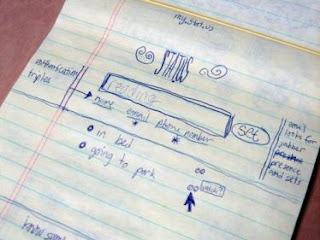 Below is a timeline for the major events that lead up to Twitter's $1 billion valuation.

In business, timing is everything and I can’t help wonder if Twitter was launched in 2001, when the idea was developed (see picture), if it would have been a success.

I personally think Facebook's 'status update' paved the way for Twitter's initial success (or shall I say, market penetration) and that real time search (the real killer app that is posed to change the entire search industry) is something they discovered along the way.

circa 2000 - 2001, Jack Dorsey comes up with an idea. These pages now hang framed in Twitter's offices. Cofounder Jack Dorsey told the L.A. Times he drew them up around 2000 or 2001. "It was crystallizing the thought: What if you have LiveJournal, but you just make it more live? You have these people watching your journal, but it all happens in real time, and you can update it from anywhere. That document was an exploration of that concept."

May 2006, Twttr launches. Before it was Twitter, Twitter was Twttr. It was also green and white before it was blue and white. Jack Dorsey explains says name about because "We wanted to capture [a] feeling: the physical sensation that you’re buzzing your friend’s pocket. It’s like buzzing all over the world." The Twttr to Twitter transition actually has to do with (now) old-fashioned telephone keypads.

May 2006, Twitter's first tweet. We would have gone with something clever and allusivelike "@Ev, Come Here. I need you." But for Twitter's first message ever, Jack chose to simply answer the question Twitter still asks its users today: "What are you doing?" "In order to operate SMS you need the short code to operate with this cellular administration. So we were trying to get "twttr" -- because we could just take out the vowels and get the 5-digit code. But unfortunately Teen People had that code -– it was ‘txttp’ [Text TP]. So we just decided to get an easy-to-remember short code [40404], and put the vowels back in."

July 2006, TechCrunch covers Twttr. Reviewing Twitter for the first time in July 2006, TechCrunch founder Michael Arrington gave the service "a thumbs up for innovation and good execution on a simple but viral idea." Commenter Justin doesn't look so precient in retrospect, having written, "I think this is the dumbest thing ever! Who would want all their personal text messages on a public website for anyone to read and track?"

August 2006, Users tweet about a San Francisco earthquake, the 'aha' event. When a small earthquake shook San Francisco in August 2006 and word quickly spread through Twitter, it was an early 'ah-ha!' moment for users and company-watchers. It might have been the first time people realized Twitter might be good for something more than saying what kind of sandwich was for lunch.

January 2007, Steve Jobs introduces the iPhone, Twitter's Enabling Hardware. Twitter was built for old-fashioned SMS, but because the service is all about link and photo-sharing, it works best on tiny, mobile computer. Apple put 50 million of those on the market starting in January 2007.

January 2007, Twitterrific launches. Twitter hasn't updated its design much at all since Fall 2006. Instead, it lets third-parties developers build new and better ways for users to interact. One of those developers is The Iconfactory, which first launched its popular and award-winning Twitter app Twitterrific in January 2007. Today, dozens of companies make dozens of Twitter apps, for computers, set-top boxes, phones, etc.

March 2007, Twitter dominates SXSW. [This is when i activated my account]. Twitter adoption hit another gear during 2007's SXSW Interactive conference in Austin, Texas as geeks flocked to the service to organize impromptu parties. From the conference, Valleywag's Nick Douglaswrote: "One-line one-to-many messaging service Twitter is aflame during the South by Southwest Interactive conference. The techies, bloggers, and various citezenry-of-media are pumping the service with constant web, IM and SMS messages." "Twitter staffers Jack and Alex tell me that the site, which normally carries around 20 thousand messages a day, broke 60 thousand a day this weekend. This traffic boost should add a strong layer of new permanent users. In the next year, Twitter could make a Facebook-sized blowup among the general public." At the end of SXSW, Twitter walked away with a lot more buzz and even some hardware, picking up a SXSW Web Award in the “Blog” category.

July 2007, Twitter raises $1 million at a $5 million valuation. Twitter launched as a product of another company, Odeo. But Odeo's founders saw its potential and bought out their own investors before launching Twitter as its own company. That meant Twitter needing funding. It got some from A-listers starting in July 2007 when Union Square Ventures, Charles River Ventures, Marc Andreessen, Dick Costolo, Ron Conway, and Naval Ravikant invested $1 million at a $5

October 2007, Google acquires Jaiku (Thank you, GOOGLE!). By acquiring Jaiku in October 2007 and then ignoring it til shutting it down in Winter 2009, Google spared Twitter fierce competition over users.

Winter - Spring 2008, Twitter fails a lot. Twitter users got to know the Twitter Fail Whale very well during Spring 2008, as Twitter surged with popularity and neearly caved under the pressure.The whale still comes to visit sometimes, but not as often since Twitter quit handling messages with a Ruby server and switched to software written in Scala.

October 2008, Twitter CEO Jack Dorsey steps down. Some said it was because Twitter wasn't scaling properly and some said it was because Twitter still wasn't making money, but it October 2008, Twitter cofounder Jack Dorsey stepped down as CEO and cofounder Ev Williams took over. Said third cofounder Biz Stone: “We had two very strong leaders here and we really needed to choose one." The company survived.

November 2008, President-elect Barack Obama thanks his Twitter followers. During the 2008 Presidential election, Twitter's profile rose with Barack Obama's. That candidate and others made it a central part of their grassroots efforts.

November 2008, Celebrities Embrace Shaq Twitter. Shaq wasn't the first celebrity to join Twitter when he signed up in November 2008. But he's been the best. His joining was beginning of transformation of Twitter from a geek service to something bigger and more mainstream.

February 2009, Twitter raises $35 million. Following the Facebook offer, VCs beat down Twitter's door in February 2009 to hand it another $35 million, this time at a $250 million valuation.

April 2009, CNN acquires Twitter account CNNbrk. In April 2009, CNN found itself in a high-profile race to one million Twitter followers with C-list celebrity Ashton Kutcher. CNN eventually lost, but it only had a chance because it opened its wallet and bought Twitter account @CNNbrk from a user who had hooked the account up to CNN's RSS feed months before. The story demonstrates how quickly Twitter went from being a service mainstream media ignored to one it couldn't live without in Spring 2009.

April 2009, Oprah joins Twitter. "The Oprah Effect" came to Twitter in April 2009. The traffic followed in a huge way.

June 2009, Iran riots over elections. When rioters protesting Iran's elections took to Twitter to get their message out and organize for several weeks in June, the service became nightly international news. The hype hasn't slowed since.