Apple Sold 7 M iPhones in Q3 But Its Not Just the Phone, It's the Business Model that is Driving Sales

Needham & Co. reports that worldwide smartphone shipments increased 28.6% during the three-month period ending September, boosting the handsets' share of the overall mobile phone market to 13.8%, up from 12.2% in June and 11.2% a year ago. 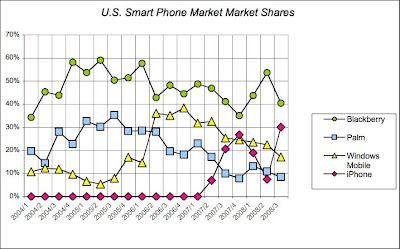 "Apple’s iPhone 3G, introduced in July, is the only reason smartphone growth did not slow in September," explained analyst Charles Wolf. "Apple shipped almost seven million iPhones in the quarter, accounting for all of the sequential shipment growth in the quarter and then some."

Those are big numbers for sure but keep in mind that 28% of the iPhone sales represented channel inventory (shipments delivered but not sold). Without this excess inventory fill, overall sales growth for Smartphones would have decreased.

What is amazing to me is that the iPhone is ONE DEVICE. RIM has multiple devices that make up Blackberry sales, and the Windows Mobile numbers include over 30 handset makers that license the technology.

According to the report, the Apple handset isnt expected to be a one-quarter wonder as feared by some industry watchers. This is largely because the iPhone, along with Research in Motion's BlackBerry offerings, are winning the battle of business models in the market through their tightly integrated ecosystems of hardware and software.