The U.S. will join Japan next year in the $1 billion mobile advertising club and is expected to generate five times that figure by 2015. Due to the relatively larger population compared to most European nations, U.S. mobile ad spending is several magnitudes higher than in Europe on a per-campaign basis, topping $100,000 for the average ad effort. Datapoints such as these are the focus of a free whitepaper available today from Smaato, a privately held mobile ad network based in Redwood Shores, Calif., with additional analysis fromresearch firm mobileSquared.
What’s driving the uptick in the U.S. market? Smartphone adoption (and the generally required data plans that go with smartphones) is, plain and simple. It’s expected that 50 percent of Americans, or roughly 150 million people, will own a smartphone by the end of 2011, for example. With Nielsen today reporting that 28 percent of the U.S. population already carries one, the halfway point of adoption could come even sooner. 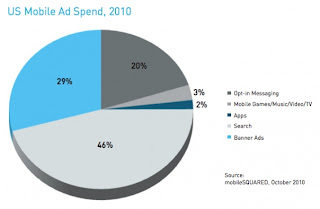 So, the flow of mobile ad money is increasing as richer activities more suited to smartphones vs. feature phones proliferate: 51 percent of the 2010 ad dollars are being spent on search, apps and digital media activities that favor smartphones with fast wireless network connections.
Other key data points from the Smaato / mobileSquared report:
Notable to me is the flow of ad dollars in search: Apple with iAds and Research In Motion’s BlackBerry Ad Service are solid investments for the future, but Google’s search dominance is still grabbing the bulk of  mobile ad dollars. With the Android Market at 100,000 apps and counting, Google has a foot in the application department when it comes to mobile ads. Earlier this month, Google reported that display ads on YouTube increased 50 percent in the past year, giving it a rich mobile content play as well.