Android Moving in on Apple

Android has successfully overtaken Apple's dominance of consumer mindshare in the smartphone world, according to a new survey from ChangeWave Research about smartphone preferences.
ChangeWave found only 38% of the people it interviewed want iOS on their next smartphone. That's down 12 points from June when 50% of the people it surveyed said they wanted an iPhone.
Meanwhile, 37% of respondents say they want an Android based phone.
To be sure, the crash in iPhone interest is in part due to the fact that iPhone 4 had just launched in June. That makes for a tough comparison, becuase excitement over the iPhone was at its peak.
Still, this is the closest Android and iPhone interest has ever been in a ChangeWave study. 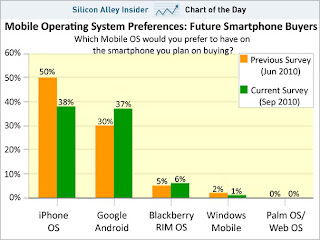