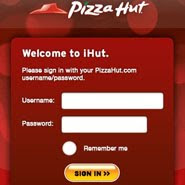 After being live in the App Store for three months, the Pizza Hut application for Apple’s iPhone and iPod touch has surpassed $1 million in sales.

From an income standpoint iPhone customers tend to be more affluent, and they’re in the tech-savvy 18-34-year-old demographic skewing slightly male. This is the demographic that Pizza Hu targets online. According to Pizza Hut, they saw a steady level of growth with their WAP site, but it wasn’t the explosive level of growth they experienced with the iPhone app.

The goal of launching the iPhone application was to provide a convenient way for Pizza Hut customers to order from its franchisee locations.

About the App Development

IMC2 (Squared) and QuikOrder partnered with Pizza Hut for the creation of the iPhone application.

The application uses iPhone and iPod touch features such as the multi-touch user interface and accelerometer with the goal of making the ordering process for each individual menu item a customized experience.

When ordering pizzas, users virtually build their own pizza by choosing a type of crust in the scroll wheel, "pinching" to select size and dragging-and-dropping toppings onto the pizza, all with visual confirmation.

If an overeager pizza customer adds too many toppings, the pizza explodes and toppings go flying across the screen with an alert to make their pizza happier with fewer toppings.

The section used to order WingStreet wings starts with a bowl of wings that changes as users choose the type of wings they want.

Next, they select a sauce and are prompted to "sauce their wings" by shaking their iPhone or iPod touch until the wings are covered. If they shake too long, the sauce flies across the screen.

As with the pizza ordering, customers finish with a representation of the wings order.

Each time a user orders using the application they get 20 percent off their entire order.

The application also provides Pizza Hut with the opportunity to promote specific products and new offerings.

For example, the application has a virtual waiter on call to take consumers’ Tuscani Pastas order. They can select from four varieties, including Meaty Marinara, Creamy Chicken Alfredo, Premium Bacon Mac 'N Cheese and Lasagna.

Pizza Hut also has given consumers a way to pass the time as they wait for their order with a game called Pizza Hut Racer, in which users are challenged to deliver a pizza quickly while avoiding obstacles in the road.

The pizza delivery car speeds up or slows down depending upon the angle of the device, and vibrations and beeps alert users when the driver hits the curb or runs into obstacles.

Mr. Acoca said that Pizza Hut will continue to ramp up its mobile initiatives. Pizza Hut is in discussions to expand to other smartphone platforms such as RIM’s BlackBerry, Google’s Android devices and the Palm Pre.

“In terms of Pizza Hut’s mobile business, over the next three to five years, more and more online transactions are going to migrate to smartphone usage,” Mr. Acoca said. “We always want to be where are customers are going, so we’re going to make the necessary investment to help customers order in ways they are comfortable.”

Rather than consumers simply migrating from calling in or visiting the PC Web site, Pizza Hut believes that the iPhone application is driving sales it may not have closed otherwise.

“We see it as being highly incremental, as much for the reason that people have a genuine need to order pizza and they want to engage with a really cool app that says something about them,” Mr. Acoca said. “The app has show-me factor making people want to engage with it and it also fulfills a functional need of ordering pizza.

“Just speak to any iPhone user, and the passion with which they describe and speak about their phone is incredible,” he said. “If they’ve taken the time to download an app, they perceive it as valuable, because it’s taking up coveted real estate.

“Apple has managed to create not just a functional device, but a tool that reaches an emotional level with consumers that most handset manufacturers haven’t’ been able to achieve.”