Forrester: Interactive To Grow To 21 Percent Of All Ad Spend By 2014 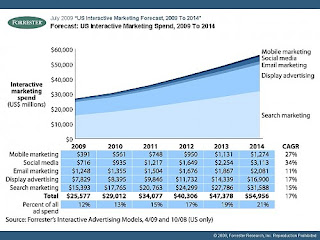 Search and display will command the biggest percentage of spend overall—with $31.5 billion and $16.9 billion in spending, respectively—but most of the growth will come from social media and mobile advertising.

Advertisers will spend just $716 million on social media marketing (including ads on social networks, not to mention devoting resources to their own blogs) this year, but that will grow by 34 percent to top $3.1 billion in 2014. (This gels with a recent Forbes survey that found that senior level marketing execs planned to spend more on viral and social media campaigns over the next six months). Meanwhile, mobile ad spending will grow by 27 percent—from $391 million this year, to $1.2 billion in five years.