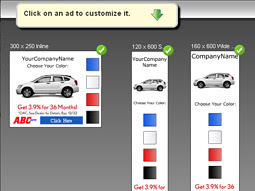 Today Yahoo rolls out the first version of its self-serve ad product, My Display Ads, a bid to win over local advertisers and convert search advertisers to display. Yahoo isn't the first to offer self-service display; Google, MySpace and Facebook have all rolled out similar self-serve display ad systems. AOL's Ad.com is developing its own self-serve system that new CEO Tim Armstrong wants pushed out the door.

But with its scale and premium display properties, Yahoo is applying some heat to this space, as it hopes to convert search advertisers -- or businesses that haven't done any online advertising -- to display.

"This just opens up access to small advertisers, which we think is important to the overall market," said Yahoo Sales Senior VP Joanne Bradford.

It's a bit of a free-for-all in the local ad market right now, with both automotive and real estate crippled, and the incumbent media, TV, radio, newspapers and yellow pages all struggling with their own compromised business models. But that doesn't change that it's a $13.6 billion market that someone is going to sort out.

DIY
"The opportunity here is to get more share out of the local ad marketplace," said Curt Hecht, president of VivaKi Nerve Center, a unit of Publicis. "Google got there first, but there's an opportunity to make the self-service side of media a little easier."

Yahoo partnered with Seattle-based start-up AdReady, which provides creative tools for advertisers to develop their own ads, a bit like what Spot Runner tried to do for the local TV market. Advertisers can pick creative off the shelf from more than 800 display ad templates -- including dancing cellphones, ads proclaiming "Amazing Values" or countdown clocks -- or bring their own.

Ads can be purchased on a cost-per-thousand impression basis or as part of a cost-per-click auction. The ad inventory fed into the system includes both Yahoo-owned and network properties through Yahoo's Right Media exchange.

Klaussner had never bought an online ad until it tried My Display Ads as part of a Yahoo pilot in the spring. For its Memorial Day sale, in addition to its normal TV and newspaper inserts, Klaussner blanketed the Greensboro DMA with online display ads.

Foot traffic turned out, well, pretty good. So Klaussner is a convert, and is increasing its spend for its next sale and adding the Raleigh-Durham and Charlotte markets to the next campaign, which it would not have done if it meant buying TV and newspaper advertising there.

"We use Yahoo for our bigger advertisers; it's something we could never do in the past with small folks," said Chris Whitesell, director at Klaussner's digital shop, Spider Digital. "It's a great opportunity, and we're going to use it for another client in High Point [N.C.]"

The second type of advertisers Yahoo hopes to win over are those that use search, and thus are accustomed to creating self-serve advertising. The hope is they might want to try display either instead of or in conjunction with search advertising.

But it's not just local advertisers. Mr. Hecht said he thinks some of the bigger search-advertising shops will avail themselves of display, as will national advertisers that want to do something specific in a local market, or even ad networks looking for targeted Yahoo-quality inventory.

It also gives Yahoo a performance-ad product besides search. "Performance inventory is such a dominant force of online advertising right now," said David Berkowitz, director-emerging media at 360i. "The recession is only enabling that further with the need for accountability."

My Display Ads has been in development for some time, and the effort pre-dates CEO Carol Bartz and Ms. Bradford. Indeed, it's the first significant move into a new market for Yahoo since Ms. Bartz arrived in January, and the first news on display, Yahoo's core business. Still, observers cautioned not to read too much into Yahoo's local play.

"There are more systemic issues they need to resolve," said Quentin George, chief digital officer for Mediabrands. "This might give them something incremental, but it's not going to have that big an effect."