Online Advertising is Officially in a Recession. 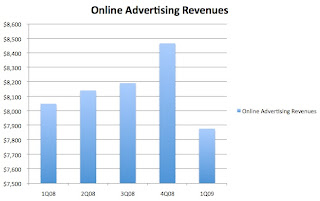 The growth of online advertising has been slowing down for a while, but this is the first quarter to experience an actual decline in revenues. Given the poor performance reported by all of these companies during the quarter, this shouldn’t come as a surprise. Only Google was able to eke out any annual growth, the rest all saw online advertising revenues drop. The fact that Google’s advertising revenues represents 68 percent of the total and that it saw modest growth helped to dampen the overall decline.

On an annual basis, the revenue growth just keeps going down from 18 percent growth in the third quarter to 8 percent in the fourth to this quarter’s 2 percent dip. On a quarter-over-quarter basis, the decline is even steeper. Other than the slight 3.4 percent rebound we saw last quarter in sequential growth, which appears too have been seasonal, the sequential growth rate has been coming down for at least the past six quarters.

These numbers represent global advertising revenues, and include network revenues paid to affiliates through AdSense and Yahoo’s ad network. I’ve stripped out Google’s licensing revenues, and for the other companies include only the advertising portions of their online revenues as reported in their quarterly earnings statements. Those interested in comparing this to more official numbers should note that the IAB, which only recently came out with fourth quarter data, only measures domestic revenues for the industry.

You can see the numbers in the table below.